The Blu Apple is your fresh produce best friend.

The BluApple® is a simple, organic, non-toxic and recyclable device for the home that extends the storage life of produce up to three times longer. You save $$ and your produce will maintain freshness, colour, taste, texture and vital nutrients for many extra days. Each BluApple™ satchel contains a proprietary mix of Volcanic Ash and Sodium Permanganate which over a 3 month period absorbs the Ethylene gas emitted by Fruit & Vegetables. By absorbing these gasses emitted in your fridge that overripe your produce, the Blu Apple is proven to keep your produce fresher for up to 3X as long. After 3 months you replace the satchel and empty the contents of the used satchel into the garden. Simple, Effective and Eco.

The Bluapple® One Year Refill Kit contains 8 replacement ethylene gas absorbent packets, enough for two Bluapples® for a full year of protection. Also included is a handy produce chart to help you remember the Produceology™ of various produce varieties. The Refill Kit is a resealable foil bag, that when completely closed, will protect your replacement packets and keep them potent indefinitely. 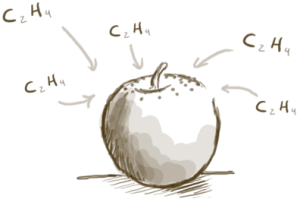 Ethylene gas is given off naturally by fruits and vegetables as a signalling mechanism in order to coordinate uniform ripening. However, once concentrated in your refrigerator or other storage areas, the presence of ethylene gas continues to speed up ripening and hasten spoilage. The Bluapple® is designed to provide effective ethylene gas absorption for three months in a typical home refrigerator produce bin or storage container. The active ingredient does not “wear out”, but continues to absorb ethylene until it has reached its capacity. A-One Year Refill Kit rounds out the Bluapple® ethylene gas management product line, allowing consumers to reuse Bluapples® and not add them to landfills.
Produceology

The Pillars of Produce Freshness

There are three pillars to produce freshness: Temperature control, humidity control, and ethylene gas control. Your refrigerator controls the temperature and humidity and Bluapple will absorb ethylene gas. By using Bluapple products, produce life can be maximized and extended.