It might be easier than you think. It’s fun and satisfying and brings you the recognition of family and friends, as well as saving you money. The Weck company has been successfully providing preserving equipment in Europe since 1900. Home preserving has become a very popular and healthy way to preserve foods, especially when produce is home-grown, given to you, or available at a farm market in your area. Weck preserving systems provide an economical as well as a rewarding experience.

The temperatures and/or processing times were not observed. As a consequence, not all the bacteria in the jar were destroyed. After several days or even weeks decay sets in and forms gasses which push up the lid. What to do? Proceed with utmost caution! Food is spoiled and must be discarded so that children or pets have no access to it. Boil food 30 minutes before discarding it.

Faults in the food itself

What to do? Discard the food!

Whenever you find a jar with its lid lying loosely on top, whether it is when performing the lid-lifting test or shortly before using the jar, always consider this signal as a significantly important warning which you should respect. Never consume any food out of such jars. Do not allow anyone else access to it, even if it’s in the garbage. In case you wish to use jars of various sealing types, including used commercial jars, do not ever neglect your own personal safety; Only canning jars that are sealed by natural air pressure, that is, in accordance with the time-tested WECK method, provide an adequate warning signal in the form of the loose-lying lid.

Jars with mechanical closures (screw-type, thread-type, or wire-bail type) do not have this warning signal.

These rules are listed in the approximate order of the canning procedure:

The WECK canning method which has proven its reliability over the past nine decades is based on two simple principles which act together. They are based on laws of nature and can neither be altered nor improved.

The natural, normal spoilage of fruit is caused by microorganisms (e.g. yeast, bacteria, mold, spores, etc.) which are present in large numbers in foods as well as in the air. During processing, all these microorganisms living in the food being canned and in the air trapped in the jar are killed. The jar is sealed off from the surrounding air by means of the lid, rubber ring and spring clamps.

During the heating process, pressure higher than normal is created in the jar. As a consequence, hot air, steam and sometimes even small amounts of liquid are forced out of the jar between the rubber ring and the jar rim. The lid and rubber rings which are fixed on the jar by means of the spring action of the clamps act similarly to a one-way valve, i.e., they allow air, steam and sometimes even some liquid to escape from the interior of the jar, but do not allow air and cooking water to enter the jar from the outside. As the jar is cooling down after processing , a vacuum is created inside. The normal pressure of the air surrounding the jar presses the lid down onto the jar rim and onto glass; this pressure causes a firm and permanent seal of the jar.

Lid and rubber ring applied and clamped on with two spring clamps.

The jar contents expand due to heating. Pressure is created within the jar. The spring clamps allow air, steam and sometimes even some liquid to escape from the jar, but not to enter it.

Jar after cooling down

A vacuum now prevails in the jar. The normal pressure of the surrounding air outside the jar presses the lid down on the jar, thus firmly sealing it. The spring clamps required during the canning process are now unnecessary and should definitely be removed after the jars have cooled down.

The processed, cooled-down jar remains sealed exclusively by means of the normal air pressure exerted on the jar lid. No additional mechanical device or force is required.

If you want to open a jar: Simply pull on the tab of the rubber canning ring away from the jar until you hear a “ps-s-st”; this sound indicates that air has entered the jar, thereby destroying the vacuum which was created by processing, and releasing the lid from the jar. The lid and rubber ring can now be easily removed.

If the jar, the lid or the rubber canning ring is defective or even only slightly damaged, and you failed to detect this before processing. In this case, air surrounding the jar may enter it and equalize the vacuum created in the interior of the jar during the heating process. Thus, the lid loosens shortly after processing, in many cases even while the jars are cooling down.

When the jar, the lid and the rubber canning ring are perfect, but not all the bacteria in the canned food have been killed (for example, the temperature was too low or the heating time too short). In the course of time (several days, weeks or even months after processing), gasses will push the lid up as soon as they have reached the same pressure as the air outside the jar, which until that point had kept the jar sealed.

Why is it absolutely necessary to remove the spring clamps after the processed jars have cooled down?
After processing, the spring action of the clamps is replaced by the natural force exerted on the vacuum inside the jar from the pressure of the air outside the jar. If you were to leave the spring clamps on the jar, you would not, by trying to lift off the lid, be able to test whether the jar was properly processed and sealed or not. This simple, but extremely important seal-test ( the “lid-lifting” test) cannot be performed when using jars with a thread type, a wire-bail type of closure or any other mechanical sealing devices.

Is there any other reason why WECK does not produce home-canning jars with mechanical sealing devices?
Yes, and it’s a reason of utmost importance: Your personal safety. In case the contents of a jar should spoil for any reason (for example, as described in Case 2) the gases formed by spoilage inside the jar must be free to push up the lid so that it lies loosely on top of the jar. This warning signal is so clear and strikingly plain that it is best suited to protect you and your family from the dangers of consuming spoiled canned food unknowingly. For this extremely important reason of personal safety, a reason which is still more important than the practical ones mentioned above, WECK has consistently refused to produce jars with mechanical wire bail seals for home-canning purposes. In case of spoilage, these mechanical seals cannot produce the strikingly clear warning signal of the loose lid.

Freezing in a glass container is an excellent way to keep foods airtight and prevent Freezer burn. Jars with large mouth openings and straight sides should be used, and lids should be tight fitting. WECK Round Rim jars with plastic “Keep Fresh “ covers are perfect for freezing foods. The ¼ litre mould jars and the 1-litre tulip jars have straight sides and 3.875-inch opening, and the “Keep Fresh” lids fit securely on the jars.

When glass jars are used for freezing, all basic freezing principles apply. In addition, these two guidelines should also be followed:

Tray Pack (IQF)- Freeze fruit on a tray for 1 hour then pack into jars. Very small headspace is needed since fruit is already frozen. Seal. (This method is also called IQF or Individually Quick Frozen.)

Dry Pack – Firm fruits, such as blueberries, can be packed directly into jars without first freezing on a tray. Leave ½ inch headspace. Seal. 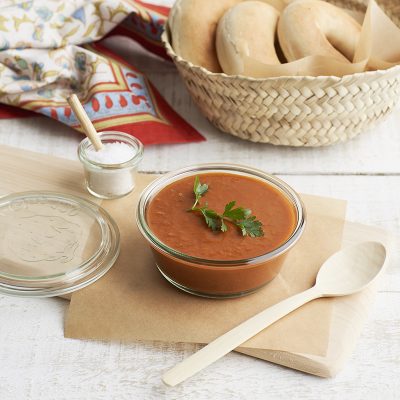 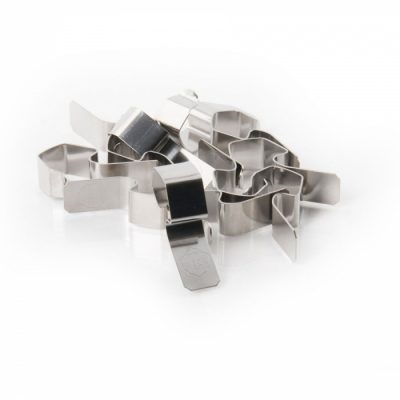 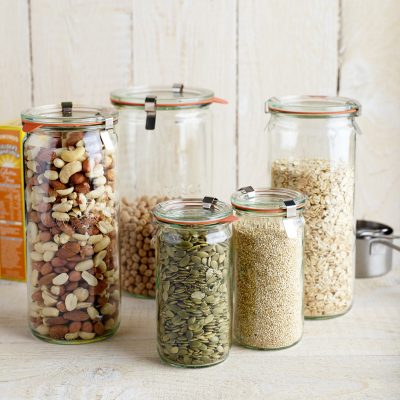 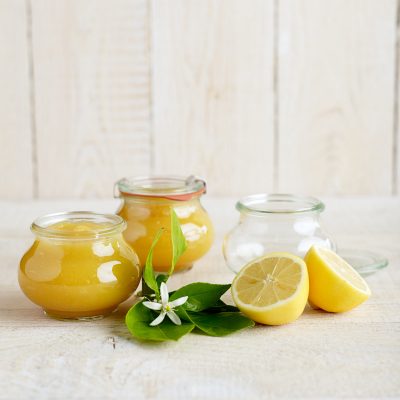 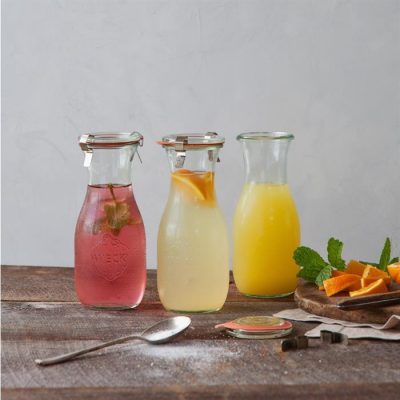 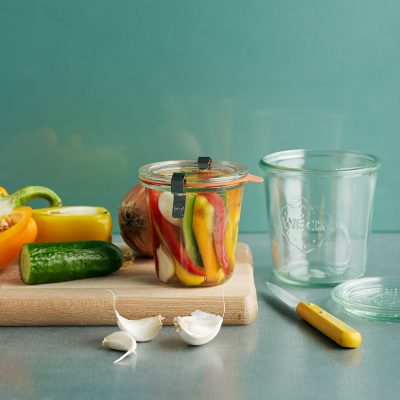 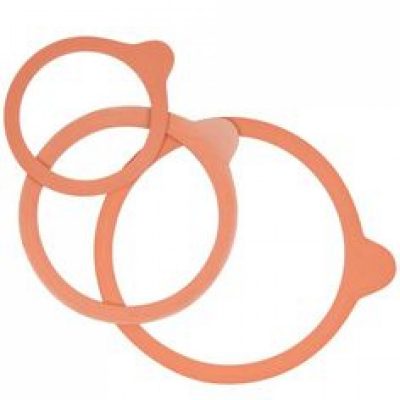 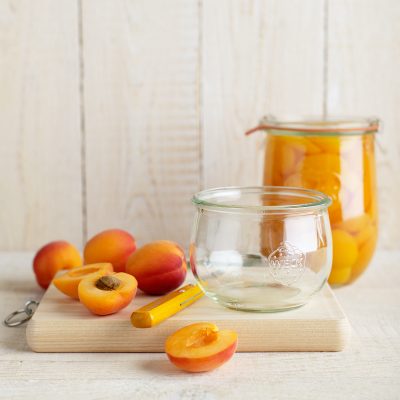 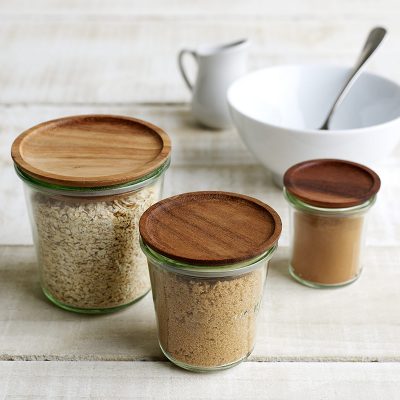 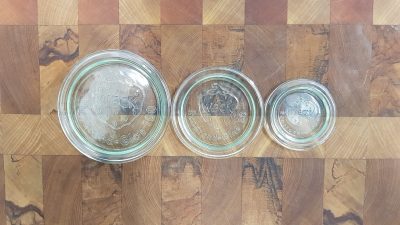 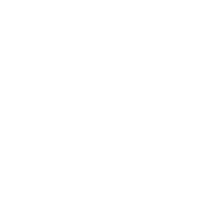